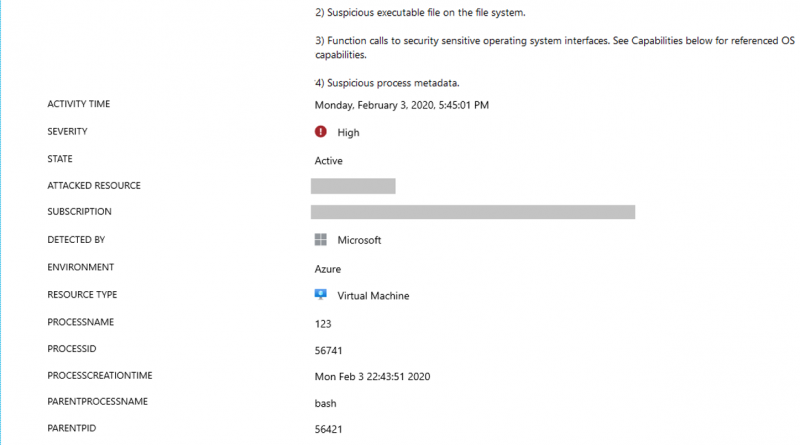 Today, Azure Security Center is happy to announce a preview for detecting fileless attacks on Linux.  In this post, we will describe a real-world fileless attack on Linux, introduce our fileless attack detection capabilities, and provide instructions for onboarding to the preview.

One common pattern we see is attackers injecting payloads from packed malware on disk into memory and deleting the original malicious file from the disk. Here is a recent example:

This attack is difficult for scanners to detect. The payload is hidden behind layers of obfuscation and only present on disk for a short time.  With the fileless attack detection preview, Security Center can now identify these kinds of payloads in memory and inform users of the payload’s capabilities.

Like fileless attack detection for Windows, this feature scans the memory of all processes for evidence of fileless toolkits, techniques and behaviors. Over the course of the preview, we will be enabling and refining our analytics to detect the following behaviors of userland malware:

In the event of a detection, you receive an alert in the Security alerts page. Alerts contain supplemental information such as the kind of techniques used, process metadata, and network activity. This enables analysts to have a greater understanding of the nature of the malware, differentiate between different attacks, and make more informed decisions when choosing remediation steps.

The scan is non-invasive and does not affect the other processes on the system.  The vast majority of scans run in less than five seconds. The privacy of your data is protected throughout this procedure as all memory analysis is performed on the host itself. Scan results contain only security-relevant metadata and details of suspicious payloads.

To sign-up for this specific preview, or our ongoing preview program, indicate your interest in the "Fileless attack detection preview."

Once you choose to onboard, this feature is automatically deployed to your Linux machines as an extension to Log Analytics Agent for Linux (also known as OMS Agent), which supports the Linux OS distributions described in this documentation. This solution supports Azure, cross-cloud and on-premise environments. Participants must be enrolled in the Standard or Standard Trial pricing tier to benefit from this feature.